Since being small I have loved the scandal and intrigue of the Tudors. Living in the UK, I’m lucky that the locations of Tudor history are never far from my doorstep. Hampton Court is arguably one of the best historic sites relating to the Tudors as so much of their history happened here.
The Palace was built by Cardinal Wolsey and presented to King Henry VIII in 1525. From this date onwards, Hampton Court Palace became the backdrop for numerous historical events including all six of Henry’s wives plus the reigns of his children following Henry’s death in 1548.

You will be welcomed at the Westgate by the King’s Beasts, ten heraldic statues which originally guarded a moat surrounding the palace. The statues are symbolic of the Tudor dynasty and the ancestry of the Seymour family (Jane Seymour was Henry’s third wife). Although some of the beasts were replaced during the coronation of Elizabeth II, most of the statues follow their original Tudor design.

Through the West Gate you will enter the Base Court.

Inside this court you will find a replica of a fountain created for Henry VIII in 1520 for the diplomatic events at the Fields of the Cloths of Gold in Northern France. The replica has been created from a painting of the event, a copy of which can be seen in the Young Henry VIII Audio Tour. It was said that during the event that the fountain continuous poured wine which may explain why so little diplomatic progress was made during this visit.
At good starting place from the Base Court is the Young Henry VIII section which can be accessed from here. This section details Henry’s life before his arrival at Hampton Court in 1525.
The Base Court is great place to view some of Hampton Court’s ornate chimneys stacks, some of which can be seen on the West Gate. During Tudor times, elaborate chimney designs were highly fashionable amongst the upper classes. The chimneys here are amongst some of the finest surviving examples of this.

Most of the royal court would have been housed in the buildings surrounding this court. Visitors to the royal family would have passed through this court to the Anne Boleyn gatehouse where the entrance to the Royal Apartments awaits.
Before heading up the stairs at the Anne Boleyn Gateway, head into the Clock Court to see the Astronomical Clock. The clock was created for Henry VIII and measures the time of day, date, moon visibility and high tide at London Bridge. The clock still functions despite being almost 500 years old. 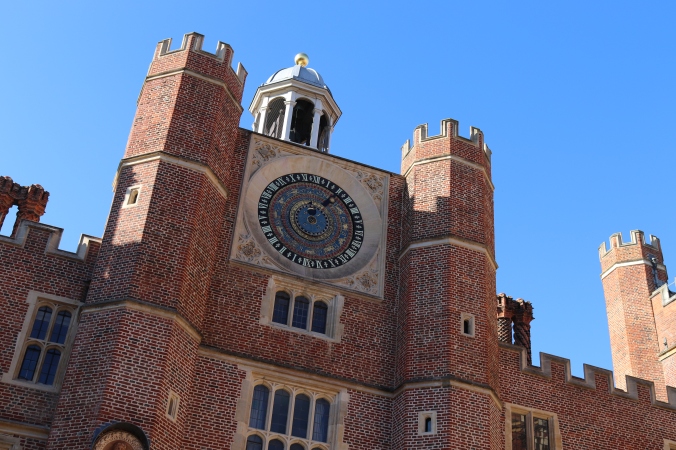 During our visit, we caught an off-duty Catherine Howard having a chinwag with a guardsman, or perhaps a re-enactment of Catherine and her relations with the ill-fated Thomas Culpepper.

The Great Hall
This splendid dining hall was the jewel in the crown of Hampton Court and was used for feasts and celebrations. This splendor can still be experienced 500 years later. Huge biblical tapestries line the walls, as they did in Tudor times, complemented by magnificent stained-glass windows. This is crowned by a gothic wooden ceiling which kept us staring upwards for a considerable time.
As there’s so much detail in this room, much of it easily missed, I’d recommend taking some time in this room to focus on some of this. 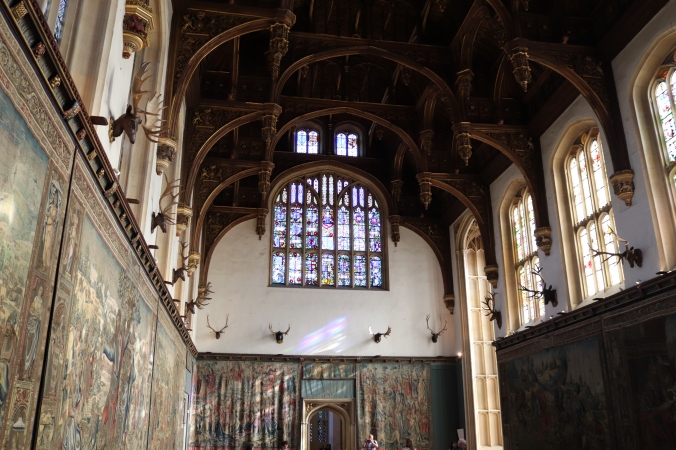 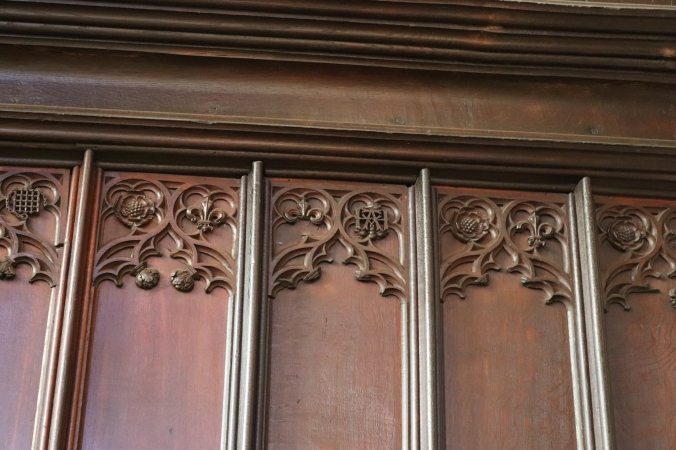 Two thrones are positioned at the head of the Great Hall, yet King Henry visited the hall very rarely. The Great Hall was most commonly used as a dining room for the palace staff although on special occasions the hall became the venue for spectacular feasts and entertainment events.
From the Great Hall, you will be taken into the Great Watching Chamber. This was where the Royal Guards were stationed and where noble men would wait for the King’s presence. Much of this room has been altered by later residence, although the ceiling is restoration of the original design. 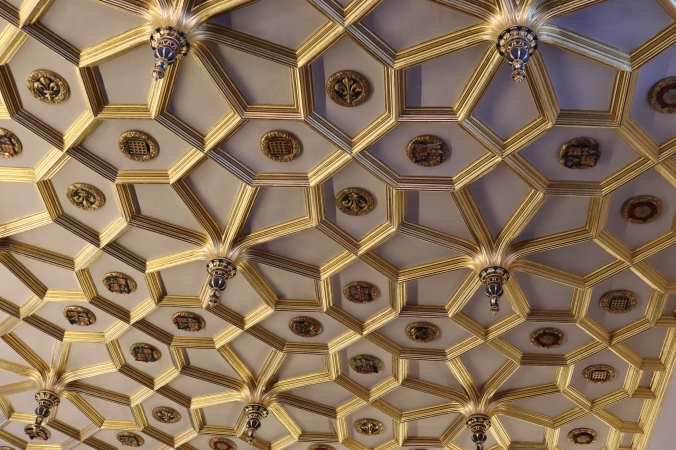 Processional Route and Haunted Galley
Although simple and unassuming, this was one of my favorite rooms at Hampton Court Palace because of the infamous events which happened here.
Traditionally this walkway would have been heavily guarded and exclusively used by the King’s closest advisors. The area is better known for its association with the end of Henry’s marriage to Catherine Howard. In 1541, after becoming aware of Henry’s desire to terminate his marriage and her life, Catherine Howard is set to have dramatically fled along this passageway whilst begging for her forgiveness. Henry’s guarded stopped Catherine from reaching him and it is unknown whether the King witness these events. From here Catherine was imprisoned and eventually executed at the Tower of London.
It is said that Catherine’s spirit continues to visit this passageway, hence becoming known as the Haunted Gallery.
Today the gallery is home portraits of the Tudor royal family including a magnificent, almost life-sized portrait of Henry himself.

The Royal Chapel is the final section with Henry VIII’s Royal Apartments and visitors view this from a first-floor balcony. This balcony was the Royal Pew and is where the Kings and Queens would worship privately, allowing the public to worship in the main part of the chapel. The three rooms in the Royal Pew were previously two separate rooms, one for the King, the other for the Queen.
It is thought that it was within the Royal Pew at Hampton Court, that Henry VIII received an anonymous note detailing Catherine Howard’s numerous adulteries, ultimately leading to Catherine’s executions.
Photography is not permitted inside the Royal Chapel.
Other highlights
Henry VIII’s Kitchens are well worth a visit and provide a glimpse of Tudor life which tends to receive less attention.
Food and supplies would have been delivered to the palace through the Seymour gate, on the west side of the palace. This gate leads into a separate court leading into the palace kitchens. Inside this section you will find a warren of food storage rooms as well as kitchens filled with fresh ingredients to bring the kitchens to life. 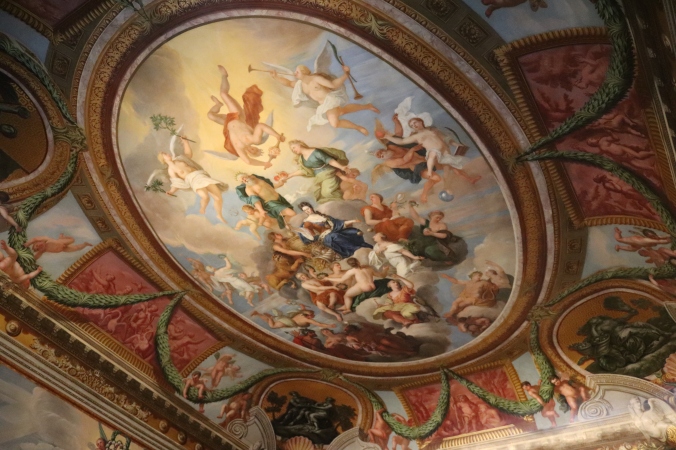 Fountain Court – Here the original Tudor design intersects with the designs of Sir Christopher Wren who redesigned and rebuilt this section of the palace for William III and Mary II. 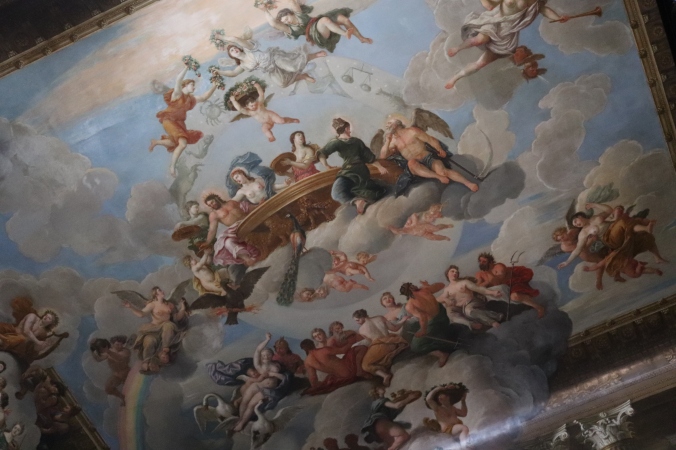 No trip to Hampton Court would be complete without a visit to the gardens. There are many garden areas open to visitors. Largest of the gardens are the Great Fountain Garden and the Privy Garden, created to complement Sir Christopher Wren’s extension of the palace.
Smaller but still worth a visit are the Pond Gardens, the Tiltyard, Kitchen Garden and the Magic Garden. A personal favourite was the Wilderness which was filled with busy squirrels during our visit. The Wilderness includes the Maze, which is small bit still takes some time to crack. Make sure you keep hold of your palace ticket as this will cover your entrance into the Maze also.

We had a fantastic day at Hampton Court, spending 3-4 hours in the palace. Exploring the gardens can add an extra 1-2 hours to this (depending how long you spend in the maze of course).
My only complaint would be that the palace is very heavy on the history of Henry VIII which comes at the expense of other Tudor Monarchs. I’ve always been fascinated by Mary I, who honey mooned here and experienced a number of phantom pregnancies in the palace. Jane Seymore gave birth to Edward VI here, dying in the palace soon after. I would have liked to have known more about these events and where these took place. It’s likely that these events took place in the wings of the palace which were destroyed and rebuilt during the Stuart period which may explain their absence. Elizabeth I is also conspicuous in her absence (excluding her privy kitchen which now hosts a café).
Entry into the palace costs £22.70 at the gate although you can get a discount of £3 if you book your tickets online. Full tickets and pricing here. The palace is open from 10am – 6pm each day.
If you are visiting Hampton Court via rail, you may be eligible for a 2 for 1 ticket. See here for more information.
If possible, we’d recommend avoiding the summer months and school holidays as the palace is considerably busier during these times.
Want to find out more?
Hands up,….I’m a little bit Tudor obsessed and it’s fair to say that I’ve read a few books and watched a few films about the Tudors in my time. If you are reading this thinking you’d like to find out more I’d recommend the following.
1 – The Tudors TV Series – What the series lacks in historical accuracy, it makes up for in drama and intrigue. The series is a delicious romp through the reign of King Henry VIII including all six wives. I was gripped from start to finish.
2 – Six Wives: The Queens of Henry VIII by David Starkey – This historical account of Henry’s wives is relatively easy to read despite the length of the book. The attention in this book is skewed toward Catherine of Aragon and Anne Boleyn, largely because these Queens were around for the longest.
3 – The Creation of Anne Boleyn by Susan Bordo – I liked this book so much because it isn’t written by a historian. Susan Bordo looks at our perceptions of Anne Boleyn as a feminist and sheds light on how our modern perceptions have marred the reputation of a fascinating and powerful woman.
4 – Katherine Howard: The Tragic Story of Henry VIII’s Fifth Queen by Josephine Wilkinson – Katherine Howard doesn’t receive as much attention as some of the other queens, however her story is a fascinating one and how downfall casts light upon Henry’s character at the later stages of his life. Many of these events took place at Hampton Court.
5 – Mary I: Daughter of Time by Allen Lane – Maligned as Bloody Mary, Mary is a fascinating character from the Tudor times with a compelling story, although is often overlooked in favour of her sister, Elizabeth I. Many of these events of Mary’s life took place at Hampton Court. This book is part of the Penguin Monarchs series which I love for their quirky and compact style.
As an Amazon Associate I earn from qualifying purchases. These earnings help me to keep the site going. You will not be charged anymore for these purchases.